Well, it’s been a month since I last posted. What can I say? Except that my blogging is at an all-time low. I’ve just lost the zeal for blathering on about stuff as often as I have in the past, and I guess the writer in me is all worn out. This sounds like a break-up: “It’s not you, it me.” I’m not hanging it up yet, but blogging is definitely taking a backseat these days as my knitting time continues to get further reduced and as I work with the doctor to figure out what’s up with my health issues, and of course, there are my sweet kids and their needs. Because my knitting opportunities have been cut back I have to ask myself everyday, With the time available, would I rather blog or knit? Hands down: it’s knitting. I will still blog, but it’s looking pretty spotty these days.

Hard to believe it’s been a month since I took the 2-day workshop taught by Janine Bajus, a.k.a. Feral Knitter on Bainbridge Island and I thought I’d report on my doings there, but first, some iPhone pictures around Bainbridge. 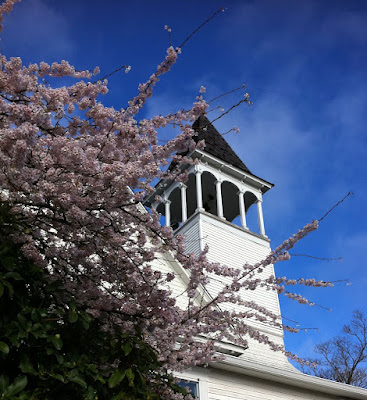 The torrential rains I’d experienced the day before gave way to a dry, mild weekend, and even some blue skies. 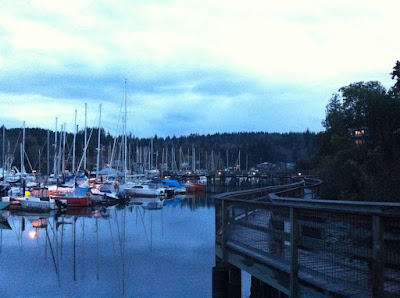 When I was a kid Bainbridge was a sweet little island that didn’t have a whole lot going on.  These days the old island charm has been replaced with nice restaurants, lots of big designer houses, and the old stores one might expect to find in a small community, such as the appliance store, the mercantile, and the hardware store are long gone.  In the town of Winslow (more or less “downtown” Bainbridge) the houses are tightly squeezed together for every inch of real estate and shoreline available.  So many people have moved here from other places.   Speaking of people from other places, during my visit to Bainbridge, I discovered during a trip to the market that the worst boss I’ve ever worked for now lives on the island it seems—creepy, and it makes the place suddenly less appealing to me.

Some recent additions to the marina I noticed were these curious rock sculptures, and there were a lot of them.  Not my taste and it kind of ruins the view, in my opinion. 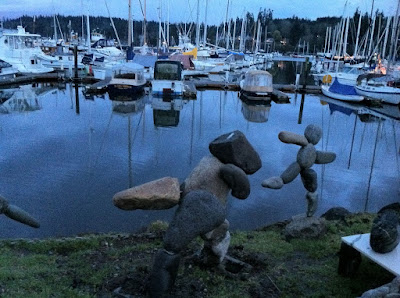 I guess this is T-Rex giving chase.

Looking at the sculptures I realized that people have a habit of putting everything along a shoreline in just about many of the places I can think of, and I don’t know why we can’t just leave the shoreline alone.  If we’re not putting a building right on the shore, then there has to be sculpture, because heaven forbid we have nature to look at.  Of course, in this instance, nature is all but gone anyway with the marina there, but personally, I’d rather look at the boats in a marina than someone’s artwork cluttering my view.

About the workshop:  it was wonderful and I’m really happy I went. It was such a great class, I don’t think I can even give it justice here, but I’ll give it a shot.

What I had planned to be a simple workshop on Fair Isle knitting turned-out to be a therapeutic course in self-discovery about my creativity…along with a lot of wonderful guidance into the world of colorwork creation. Janine brought her bin of over 200 different colorways of Jameson Spindrift (fingering/jumper weight) for us to play with as we learned about working with colors and creating the eye-pleasing stranded colorwork that is Fair Isle. With so many colors to choose from I found it really hard to narrow down my choices and realized that when I’m given such artistic freedom, I get lost and have difficulty getting out of the starting gate. 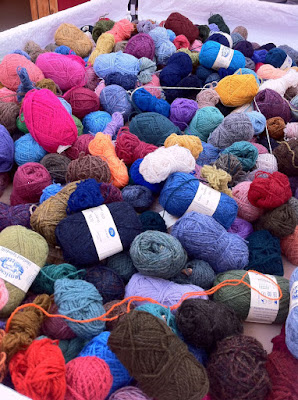 I so loved this bin of yarn! So much fun to be had.

Janine asked us all to bring a photo as a source of inspiration and mine was a photo I took of cherry blossoms against the backdrop of the cherry tree trunk. 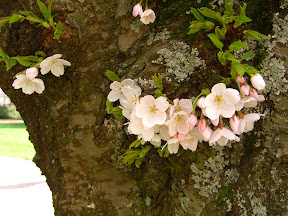 With that in mind, we selected yarns that represented the overall feel of the photo and made speed swatches. Here are mine. 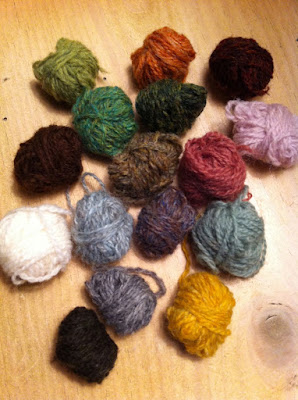 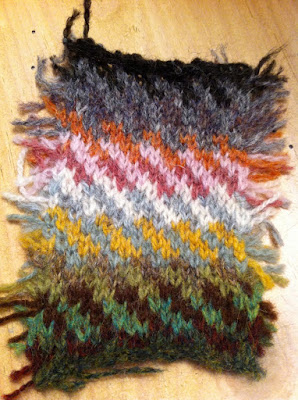 From there we selected a Fair Isle motif from one of two of Janine’s patterns to use to put the colors in a pattern stitch swatch.  I’d show you mine, but it’s somewhere around here and I don’t know where, but if I find it, I’ll let you know.

It was a fun opportunity to just play with color, and I made many visits to the yarn bin when I decided a certain color just wasn’t working for the swatch.  What a great opportunity that was!

Will I do any stranded colorwork design? Maybe, if I can find the time. Do I feel more comfortable about using swatches? Yes, and I’ve never liked swatching before, but I now have a greater appreciation of it now that I’ve experienced firsthand how the creative process depends on it. What was the key thing I learned from the class? That I have an highly critical inner voice that hinders my creativity.

Finally, and totally unrelated, while watching scenes from Prince William and Catherine Middleton’s wedding a few days ago, I was struck by how amazing this scene was. 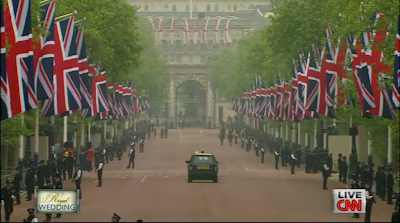 I snapped it on my iPad while watching via Slingbox.  I don’t ever remember The Mall looking that spectacular for the few occasions I’ve watched on TV.  I’m not sure if it’s any different from Charles & Diana’s wedding day, but it seems to me as if the flags are bigger.  Having said that, looking online I see that those flags are always there, but somehow it just seemed so special this particular day, I had to capture the scene.  I love the contrasts of spring green against the black of the uniforms, with the splash of blue, white and red, and soft mauve of the pavement.  I wonder how this scene would swatch? 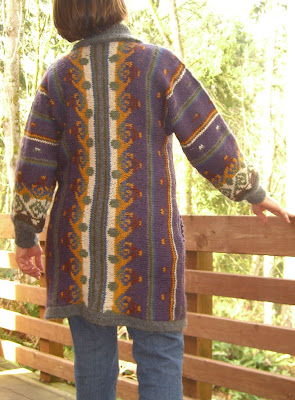 The one and only, Jacob’s Delight is done. What a fish tale it was!  There were some ups and downs and Jacob’s Delight sometimes seemed like a soap opera, but it’s done and I can no longer refer to it as the fish that got away, and no longer is it relegated to that sector in my mind where it once inhabited, the What Could Have Been sector.  I am really happy that this pattern, that which I first saw in the first ever knitting book I bought in 1984, the very same book from which I made my very first knitted item, has become a dream realized.  Not only that, but something I can actually wear, knowing it turned-out quite well, unlike that other ill-fated sweater I made from the same book which turned-out pretty poorly. 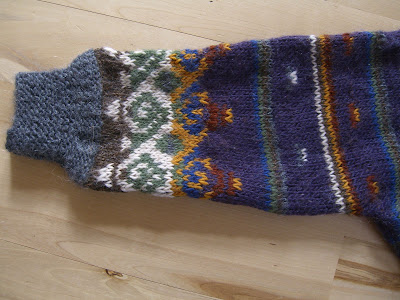 I managed to work around the pattern error indicating the wrong amount of purple yarn (too little), and all visible areas requiring purple are purple, and in the end I was able to make the picot edging for the pockets in purple without shortening the edging afterall, even though I’d done that in my previous post. The only place where I had to do something different to make up for the shortage of purple was the insides of the pockets, which I made in brown, instead, using a bit of purple for the insides where it would be visible from the opening. By the way, I can’t let it go and just have to say that there’s some kind of irony in the fact that purple was the color I ran low on, since isn’t the only place in the bible that my name (Lydia) occurs is where it says she was a merchant of purple fabric? I don’t know why that seems ironic to me, but it does. I mean what are the chances in a biblically-titled pattern involving 8 colors that purple would be the one I’d have to scramble for? I’m just sayin’…. 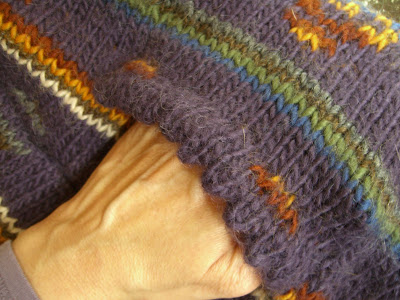 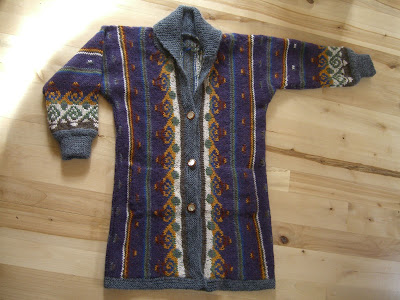 While shooting pictures of the coat, the first bee of the season stopped by and tapped on my window. I was so happy to see her I had to take a picture of her, as well. 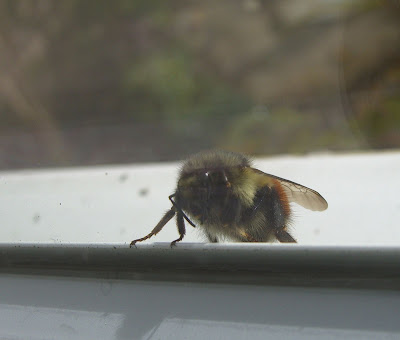 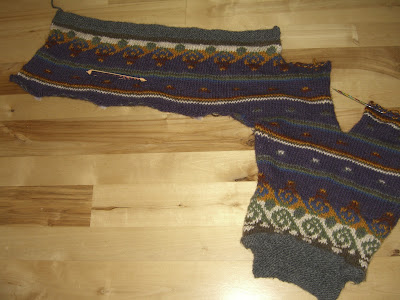 If Jacob’s Delight were a novel, it would be an epic. Such twists and turns, such drama, such joy. Maybe that’s overstatement. You see, I’ve made cardigans and sweaters using top-down, sleeve-to-sleeve, and bottom-up methods, but never anything like that of Jacob’s Delight and it makes for a wild ride. Overall, the coat is knit cuff-to-cuff, but it’s not that simple. It starts at the left cuff, works up the left sleeve, then divides the stitches with half to a stitch holder and the other half worked and added onto to make the front left panel, binding-off after the buttonband. Then we go back to the saved stitches at middle upper arm and cast-on additional stitches to work on the left back, and from there to complete the back all the way to the right side, and then down the length of the right sleeve, pick up saved right upper arm stitches and complete the right front, ending at the right buttonband. Got that? Oh, and the pockets are cast on as you go around the sweater, with the cast-ons put on stitch holders to be worked at the end. There will be seams of about 8″ long running lengthwise from the middle upper arm to the shoulder to sew-up later, and the collar and the hem border along the bottom will be pick-up and added on at the end. 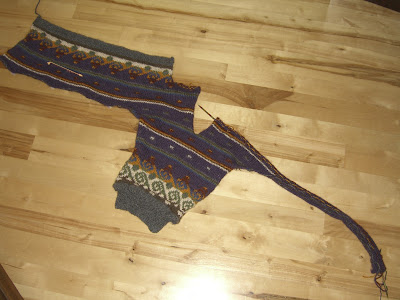 Completed left front, left sleeve, and beginning of left back.

I tried reading ahead before I started, but just couldn’t grasp how it was supposed to go, and now that I’m almost done with the left side, I am amazed that anyone could come up with such configuration. It has to be just about the most entertainment I’ve had in a long time, and it’s entirely doable, but just very, very different. It certainly dusts the cobwebs off my brain. I just can’t imagine how anyone would come up with such a configuration, but then that’s probably why I don’t design sweater patterns.

To top off last week’s mayhem in my life, I ended-up with a nasty case of Pink Eye in both eyes. I’d never had it before and it never occurred to me that that’s what I had, so I went most of last week with my eyes in a miserable state until a friend who works for an opthamologist told me I had pinkeye. I learned a few things about this highly contagious ailment: that you don’t just catch it from other people, but you can also develop it from being sick (as I did), that high doses of vitamin C (2,000-4,000 mg) throughout the day reduce the intensity and aid with healing, and that very warm compresses also alleviate the symptoms (thanks to my ever so handy Prescription for Nutritional Healing book for these at-home solutions). That Thursday night after my friend’s observations, I had 1,000 mg. vitamin C (Emergen-C), and put very warm compresses on each eye; these two things reduced the pain and blurriness sufficiently. I finished-off sleeping with a wet compress on my eyes that night to keep my eyes from pasting shut, which wasn’t easy because I that compress got cold at night, but I just couldn’t stand my eyes being crusty one more morning.  I was glad to get started on optical antibiotics the next day.