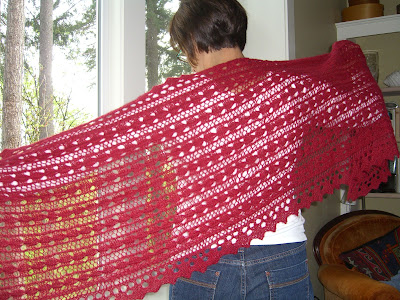 Despite my frequent bouts with blogger’s-block I’ve been hard at work finishing projects that have been hanging-on longer than they should.  In fact, I’ve been quite the monogamous knitter of late and it’s paying-off.  I present Red Melon using Melon Pattern from Victorian Lace Today by Jane Sowerby. 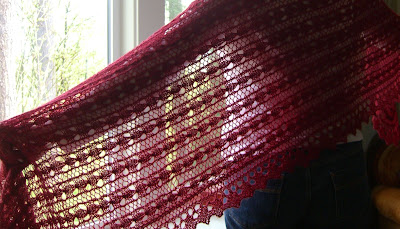 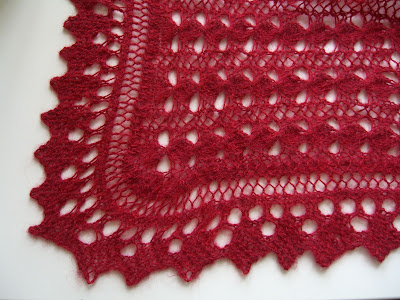 Corners got a bit wonky because I had a hard time getting around the bend.

I started Red Melon at the end of March 2010, and I think I just mentally assigned to the same category as other big shawl projects, most notably Bird’s Eye Shawl (too boring and too big) and Grand Duchess (too complicated and too big), both of which remain in Hibernation Hell. By which that translated in my mind that this will get done—never, but with Jacob’s Delight done I felt like revisiting some things that have been lurking in dark corners of the house looking at me with big doleful eyes. You know, sometimes you just need a confidence-building project, and Jacob’s Delight was that.

Melon Pattern is really very enjoyable, especially for a lace project, and despite the repetition of the same two stitch patterns for so long, the rows were short enough, the stitch patterns are easy enough to memorize, and the progress fast enough that it made for a pretty good knit, when I actually gave it a chance.  The yarn is a dream—so soft. 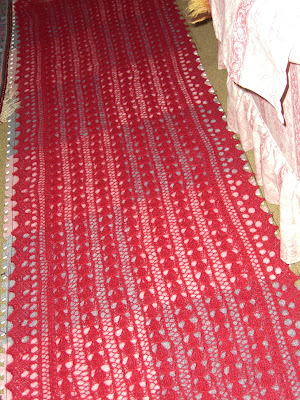 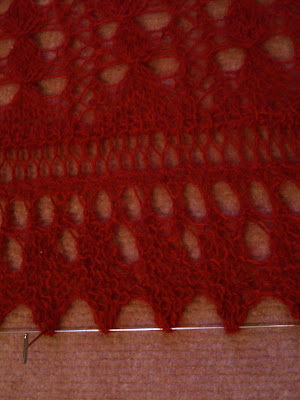 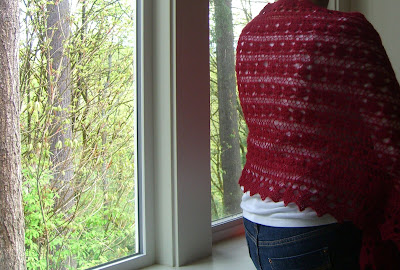 Many of the pictures in this post would not have been possible if it weren’t for my new photographic assistant, Joby Gorillapod Magnetic Flexible Tripod. What a wondrous thing! 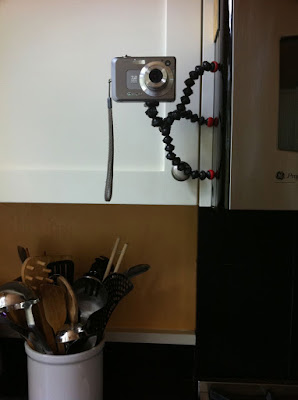 I’ve finished Lacy Serpentine Scarf and it’s so-so. Of all the things I’ve knitted in recent years, this is one among my disappointments.

The pattern itself is fine, but I just used the wrong yarn, and at the very least, not enough of it. The end result is a scarf that is narrower than I’d hoped for and not worthy of the gift I was going to make of it. I don’t know what I was thinking when I chose such thick yarn. Oh, well.

So, now I’ve added another project to my list and this one is a gift for my mother. She often drops hints about things she’d like, but when it comes to knitting, she makes actual requests. Last November she asked for a lace scarf in red, but I knew that with our adjusting to life with a second child, who herself was adjusting to life with a new family, in foreign land, in foreign surroundings, a foreign language and foreign food, and with Thanksgiving and Christmas looming, having such a project ready for my mother by Christmas would be extremely unrealistic. Now I hope to get to her by mid-May, but I’ll probably have to aim for sometime this summer. The project is Melon Pattern for a Shawl by Jane Sowerby. For this I’m using Alpaca Wool Fingering by Frog Tree, which is one of those yarns I just love feeling.

This is the central portion of the shawl with the melon stitch, which is really easy to memorize and is rather a pleasure to work, and the lace edging will be worked later.

True confession, and perhaps of no surprise to regular readers, since we got our first iPhones on the first day they became available in 2007: we got an iPad.

I can’t yet say it’s a life-changing device, but it’s great way to watch streamed Netflix movies and for watching TV off of our TiVo by way of application called Slingplayer Mobile paired with a Slingplayer device. After the iPhone, which I think is fair to say, revolutionized mobile phones, I can’t yet see that iPad will have that same effect, but it’s a fun new gadget. My husband is in Geek Heaven, although he maintains he bought it for me.

Among other news, the best yet, our adoption of our daughter was finalized at the end of March, and it feels great knowing that she really is a member of our family forever, and just in time for Easter.

First egg hunt and she got right into it.

On a note about adoption and some unhappy news circulating involving World Association for Children and Parents (WACAP), the same organization that facilitated the adoptions of our children: WACAP is a wonderful organization and the people who work there are dedicated to making the most appropriate placements, with sensitivity to the situation of each child, the child’s birth country, and the prospective adoptive parents. Isolated situations may happen, and I can’t speak for those, and they should not be weighed-in against WACAP. If you’re considering adoption, I have nothing but praise for WACAP and its staff.

What a week! This week I discovered that I’m allergic to something in bloom around our house, probably a tree, and I’ve never considered myself a person afflicted with seasonal allergies before. Teary eyes, sneezing, and a nose so drippy I couldn’t keep enough tissues around me to keep up with it. By Tuesday afternoon I got my hands on an homeopathic remedy and things have been improving ever since, and by Wednesday I was actually able to put mascara on again.

Last night, in celebration of my sister-in-law’s birthday, my mother and I met her at La Taberna Del Alabardero in Seattle for an evening of Spanish food and flamenco. However, not before arriving an hour late because we live across Lake Washington, east of Seattle, and I made the unfortunate choice of the wrong bridge, and chose the one with the even more unfortunate car-flipped-onto-its-roof which meant that all lanes of traffic were down to one. The evening ended well with a wonderful performance of authentic flamenco and singing by the Jesus Montoya Flamenco Company, despite a being served a very poor example of Spanish food by La Taberna.

Any unpleasantness this week was vastly improved by the sale at So Much Yarn in Seattle, conveniently located near Pike Place Market. Yes, I broke my yarn diet, but all because I fell hard for a skein of Pagewood Farm Yukon Hand Dyed Sock Yarn in Harvest colorway. I spotted this one skein the week before the sale and kept dreaming about it all week long. Being the first customer at the sale, I was relieved to find my one skein exactly where I’d left it during my previous visit.

The other deal-breaker for me was the 3 skeins of Dream in Color Classy (worsted) in Gothic Rose colorway. I dreamed about it almost as much as I dreamed of the Yukon yarn, and, yes, I dreamed in color.

And since I was off the wagon, I added 2 skeins of Berroco Ultra Alpaca Fine in a warm golden brown.

Oh! I was so bad today… What’s knitter to do?