And suddenly, everything seemed more doable.  I feel like I’ve been living in a cave for the past few weeks.  Normally, January doesn’t hit me like that since the days start getting longer; rather it’s December that affects me that way.  Even Zephyr was happier and today seemed a good day to post. 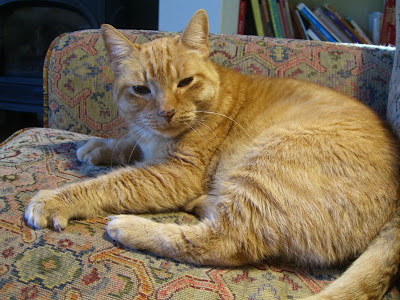 Feeling good, despite the beginnings of what may be the flu, it just seemed like a good time to throw my knitting down on the floor and take a picture. 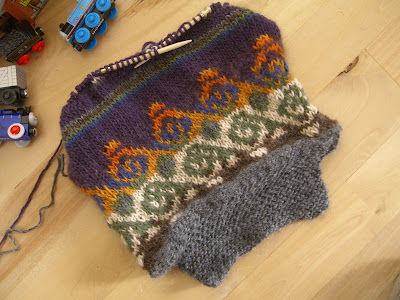 I dropped a teaser in my last post, way back on December 25th (sorry!), saying that I’d begun work on something that isn’t another My So-Called Scarf (which I personally find borders on addictive) and is from the first knitting book I bought in 1984. I have long categorized it as one of my dream projects, you know “the one that got away”, or almost got away. When I first saw it in the pages of Amy Carroll’s The Sweater Book (Copyright 1983), I said, “Wow! That would be nice to make. If only…” But being new to knitting and living on a college student budget at the time, it was not the time to delve into such a project. Happily, now is the time.

The kick-off was not without its set-backs. There were four re-dos of the first cuff (it’s knit vertically from cuff to cuff) alone because I couldn’t decide if I liked close-fitting cuffs for a coat (decided to leave the pattern alone), especially since the edging for the rest of the coat isn’t fitted, and then I totally messed-up on the original yarn selection and was way, way off on the gauge.  So I ended-up with good ole’ Lamb’s Pride.

I present the team for my dream coat: 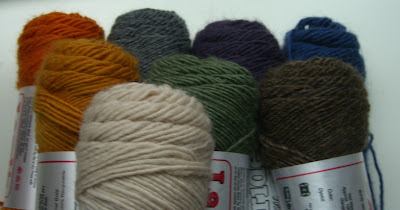 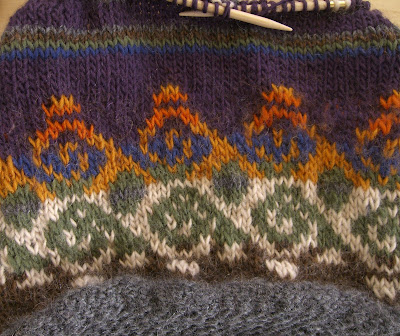 Then I discovered a typo, in which the pattern calls for no more than two colors per row in the Fair Isle tradition, and suddenly there was the odd appearance of a third color at the seam ends of the row.  Caught that before I was too far along.

Despite these little speed bumps, the project is now under way and I hope to see it done before it gets too warm to wear it.

So that’s what I’ve been doing, knit wise.  In between waiting for yarn orders (I tried to buy locally, but the yarn selection wasn’t good for a project like this), picked-up Birds Eye Shawl and finally made it to the end of the first skein.  Almost 4 years after I started it.